The island of Sicily is bursting with artistic creations and creative energy. Only here can the heads of the thousands of tourists that flock to Sicily mingle amongst those of kings, queens and moors. The ceramic jars in the shape of heads, known as Teste di Moro, that Sicily is famous for are just one example of the island’s ceramic production which can be traced back as far as 2400 BC.

What makes the ceramic tradition in Sicily so special is its ability to recount a visual history of the island. Unique fusions of myriad cultures have contributed different elements to their style and design, with some still apparent today. Sicily, reportedly the most conquered island in the world, has drawn many colonisers for its strategic location and fertile landscape, and as such across the island aesthetic influences from Arab, Greek, Norman, Phoenecian, Roman and Spanish inhabitants can be observed, just to name a few. 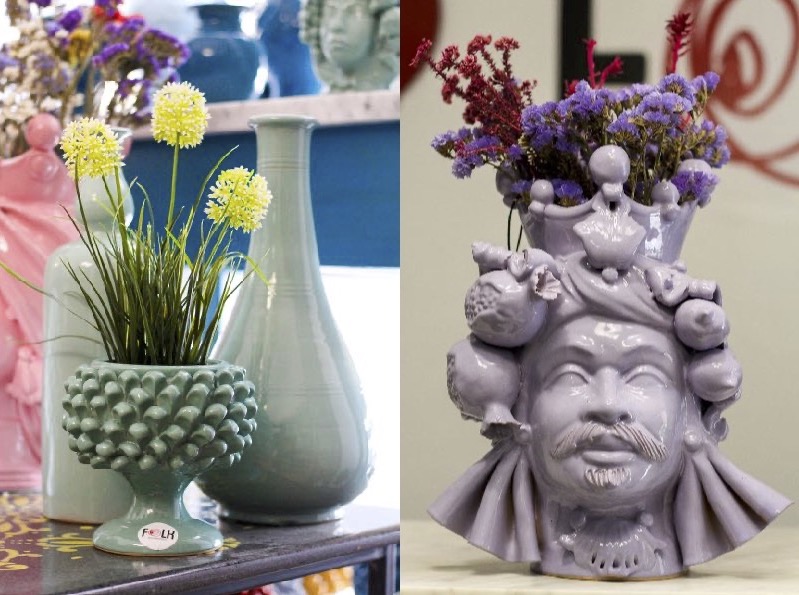 What is ‘ceramic’?
The word ceramic, ceramica in Italian, comes from the Greek keramos meaning clay. ‘Ceramics’ is often used as an umbrella term under which can be found earthenware, stoneware, as well as terra cotta, porcelain, china, maiolica and the array of techniques used to create them.

Earthenware refers to objects made of terra cotta, literally ‘baked earth’ in Italian. To make earthenware, clay objects hand molded from freshly mined clay are left to dry in the sun or in an oven to bake or partially bake. The result is an object that is brittle and water resistant, recognisable for its characteristic red colour.

Stoneware refers to objects fully baked, or fired, at higher temperatures which results in an opaque material, still of a reddish-brown hue with a granular texture.

Porcelain is made if the clay is mixed with feldspar or steatite before firing, and results in a grey-white, almost translucent colour with a smooth texture.

Maiolica, or majolica, coming from Italian Majorca, is ceramic earthenware made in Italy that is coated with tin oxide enamels before firing. During the firing, the molecular structure of the sun-dried clay changes, first hardening to become terra cotta, then crystallizing to become firmer and more durable. The painted enamel also crystallizes and then binds to the ceramic, while taking on a deeper, more distinct colour with a reflective surface. 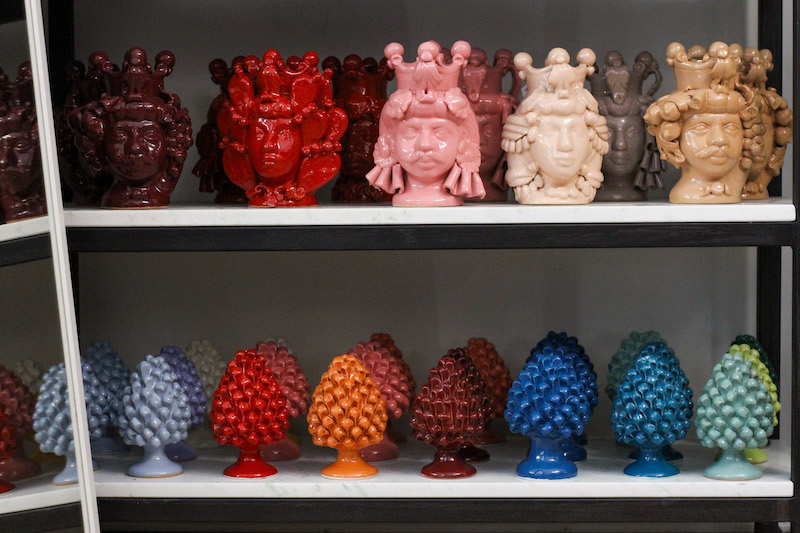 History of Sicily’s Ceramic Tradition
Due to its abundance of good quality clay, Sicily has been a natural home to foster a rich and colourful ceramics tradition that continues to thrive to this day. The clay found in Sicily is unique for its distinct combination of silicates. The oldest earthenware ceramic objects found in Sicily have been dated to 2400 BC, and it is thought that the ancient inhabitants of Sicily, known as the Sicanians, were making objects from terra cotta more than three thousand years ago. Around 1200 BC Elymians arrived from Asia Minor, followed by the Phoenicians, Greeks, Romans, Normans and Spanish. Some of the strongest influences on Sicily’s ceramic tradition came from Arabic cultures however.
With each influx of colonising peoples, this ancient tradition was developed and modified, in as much as design and style as in technique and practice. The Greeks brought their distinctive vases, amphorae and urns. The Roman’s arrival in Sicily brought an Etruscan influence and the introduction of terra sigillata: intricately detailed red pottery. In the 8th century the Cretans introduced the pottery wheel, and during the Middle Ages Byzantine and Arabic influences made their mark. Notable for their colour palettes, patterns and materials, many Arabic techniques and stylistic tendencies are still in use today. 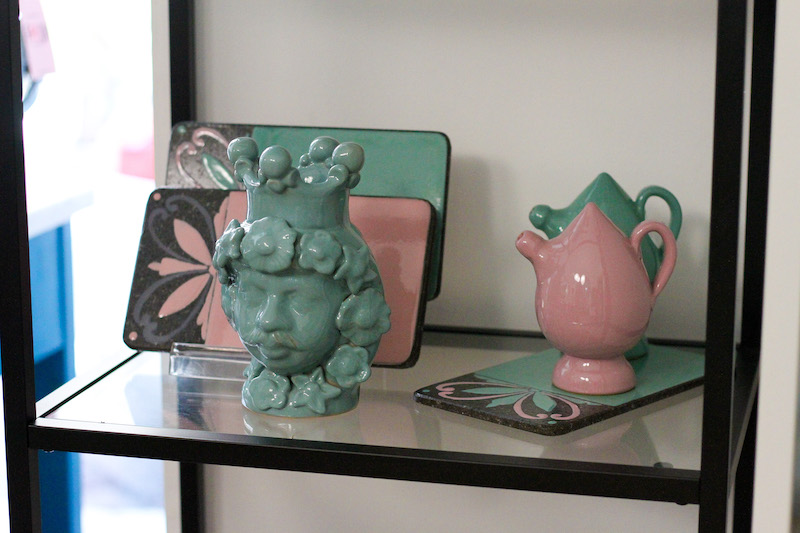 Ceramic Centers and their Respective Styles

Caltagirone is known as the ceramics capital of Sicily and due to its abundant clay supply local production dates back to 200 BC. The influence of the Arabic cultures can still be seen today, as much in the ceramics as its name, originally qal’at-al-ghiran, meaning ‘Castle of vases’. Blue, green and golden yellow hues typify the ceramics of Caltagirone, as well as the glazing technique, introduced by Arabs in the 9th century. Ceramics are an integral part of the city, adorning many of the buildings, amongst which are more than eighty ceramics workshops. Caltagirone is most well-known for its ceramic heads, and Scala Santa Maria del Monte, a 142-step staircase where each step is decorated with hand-painted ceramic tiles, alternating between rows of organic, geometric and figurative patterns.

Santo Stefano di Camastra is a highly-regarded ceramic town in Messina province. Like Caltagirone, the streets glitter with maiolica tiles, mosaics and shingles, but despite their beautiful appearance now, the origins of the town’s ceramic industry lie in destruction. After the landslide of 1682, the town was moved closer to the coast and also closer to an abundant supply of clay, leading craftsmen to use clay from the mines along the town’s seaside road. After the city was rebuilt, Santo Stefano’s economy relied on the production of handmade ceramics and so the industry became ingrained in the identity of the town and its inhabitants.

Sciacca is located in Agrigento province, and its ceramic production dates back to 800 BC. Today, many of the styles and colours reflect those that have been used for centuries by craftsmen. The town is most well-known for its maiolica objects, including tableware, bottles, vases, puppets and tiles, many decorated with vivid blue, green, copper, yellow, orange and turquoise. Through the sixteenth to the eighteenth century, the town was responsible for furnishing the noble palaces in Gela and Agrigento with their maiolica artifacts.

Burgio is an agricultural centre with Arabic origins in the Middle Ages, also located in Agrigento province. Burgio’s ceramics and bronze bells are exported worldwide. Its ceramic production has benefitted from the abundance and variety of raw materials in the local area, including hard stone and clay, with clay quarries being exploited as early as 1400 for the production of tiles and tinned bricks. The tradition was developed further by the settlement of some inhabitants of Caltagirone who settled and established maiolica factories. This curbed the dominance of Sciacca ceramics at that time and provided training centres for many students over the years.

Let’s turn our attention to Magda Masano’s FOLK – one of the wonderful contemporary manifestations of Sicily’s ceramic culture – that showcases classic ceramic objects with a modern twist. While maintaining some of the traditional techniques and practices, the ceramic objects in FOLK are anything but traditional and instead challenge what exactly makes ceramics Sicilian.

Despite their modern appearance, the techniques used to create FOLK’s ceramics bear continuity with more traditional ceramic production in Sicily. Everything in FOLK is hand-crafted, and starts with a sketch. Once the idea is on paper, decorations chosen, the clay is hand molded into the desired shape before being left to air dry. Then, the clay is ready for its first baking: 600-650 degrees for 24 hours. Then, the powder enamel is applied as a gloopy paste, before its second firing – this time at 1000 degrees for 48 hours. During this period, the structure of the clay changes, so that the terracotta fuses with the enamel to create a material similar to glass.

If you take a visit to Magda Masano’s FOLK, you will immediately be greeted by the Teste di Moro Pop whose striking form and vibrant colours dominate the space. The contrast between their intricate clay decoration and monochrome finish creates an object that is as streamlined as it is impactful. Their uniform glazes in a range of tasteful yet bold tones are the perfect accompaniment to display the craftsmanship involved in the hand-molded decorations of FOLK’s Teste di Moro. The reflective finish catches the light to demonstrate the relief of the facial features and decorations, and depending on the light conditions – or your mood – they take on whichever personality you care to give them. This take on the Teste di Moro has brought this iconic object more in line with modern tastes for bright, block colours, and while coming in a range of sizes, they can add a pop of colour and a taste of Sicilian legend to any part of your home.

The predecessor to the modern day water bottle, the bummulu is a very charming object visually, and one whose use is still as relevant today in the hot Sicilian summer as it ever was. The ones from FOLK come in a striking range of block colours, from deep purple, to duck egg blue and a peppery mustard yellow. Whatever your tipple, wine to water, the Bummulu and its smaller counterpart the Bummulu Malandrino maintain a refreshing temperature even in the midday sun.

Symbolic significance has been attributed to the pinecone in many cultures throughout the world and history. A symbol of enlightenment, immortality and fertility, its image and form have appeared in cultures in Mexico, Syria, Egypt and Europe among others. When in Sicily you will see them on balconies, atop houses, but the brightly coloured ones from FOLK that come in a range of sizes also make a great addition to a bookshelf or table, whether it’s the one you eat from or the one where your alarm clock sits.

These three objects are just a few of FOLK’s select and intriguing range of ceramics, some with their roots in Sicilian heritage and others not. They will afford your home a pop of colour; a handmade touch; a glimpse into the rich and varied history of Sicily’s ceramic tradition, and, most importantly, are all handcrafted with love. They reflect a technique perfected over millennia, proving the longevity of clay both in aesthetic and functional quality. The magic of seeing a two-dimensional design transformed into a three-dimensional object is something that has inspired people for millennia and places like FOLK are a sign that this will only continue. To view the full range of ceramics in FOLK, head over to the website, or even better, pay us a visit in person.